Please note: I don’t have the exact tutorials we used for each of these crafts, just my best guess on similar ones!

General instructions: This was so easy, we didn’t have a singular source.

Bring your own: Ideas

#Ladiescraftbeersociety – card & champagne edition! Only place I'd go after being rear ended.

Bring your own: Beer!

Bring your own: Beer!

General instructions: I’m not sure which recipe we used and don’t want to credit the wrong recipe, but Google “pickling spices recipe” and go to town!

Bring your own: Jars

Bring your own: Leaf, if you want

General instructions: Via Decor by the Seashore

Bring your own: Wine cork collection!

Hosted by: Field trip! We had a holiday dinner at Toast Cleveland

Bring your own: Needle-nose pliers

The March LCBS was a success! Our group attempted to make homemade body wash, and nearly everyone participated in the craft, some people even making more than one kind. We haven’t tried them out yet, so we’ll see if we like the scents/lathering/everything else you judge a body wash by, but it was an easy craft that everyone enjoyed making, so I’d call that a success.

Another successful #ladiescraftbeersociety in the books! We made all natural body wash and celebrated #internationalwomensday with a tongue-in-cheek dig at the pink tax thanks to @brewdogusa's #pinkipa. Stay tuned for a full recap on our new website! (Link in bio.) . . . . #crafts #diy #lcbs #naturalbeauty #craftbeer #brewdog #sundayfunday #cleveland

Want to make your own homemade body wash? Here’s the recipe we followed. They were inspired by these two websites: Wellness Mama and DIY Natural. 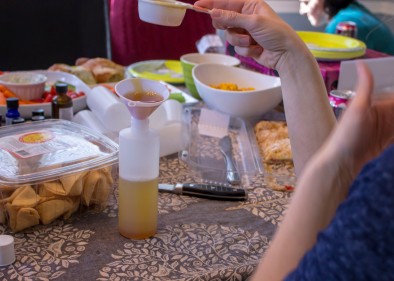 I made grapefruit-scented body wash, but some people were more adventurous and tried a few different essential oil combinations. Here are some of the combinations that people made: 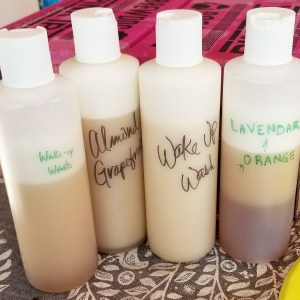 For our beer theme of the month, we did “beers that celebrate womanhood.” It was a fitting theme, chosen thanks to International Women’s Day earlier in the month. AND fitting because we had our first beer sponsor – BrewDog!

BrewDog sent us some samples of their Pink IPA to enjoy while we crafted. Here’s a little bit about the Pink IPA (from BrewDog:

Satirically dubbed Beer for Girls, Pink IPA is BrewDog’s clarion call to close the gender pay gap in the U.S. and around the world and to expose sexist marketing to women, particularly within the beer industry. BrewDog will be using its most iconic beer, Punk IPA, as a weapon in this fight, packaging it in lurid pink and renaming to Pink IPA – a send-up of the lazy marketing efforts targeting the female market.

In the U.S., the brewer will also be serving the beer to those who identify as women for 80 percent of the standard retail cost of Punk IPA, mirroring the gender pay gap in the U.S. With the product being identical to the blue-branded Punk IPA, the brewer intends to trigger questions about why women continue to earn less than their male counterparts and offer them a discount on the beer equivalent to the gender pay gap. … BrewDog will [also]  be donating 20 percent (the gender pay gap in the U.S.) of its proceeds from canned Pink IPA and Punk IPA to causes that fight against gender inequality.

The ladies loved the Pink IPA and of course, we all loved the charitable contribution associated with it. So a BIG THANK YOU to BrewDog for sending us the beer and supporting women!